What a Difference a Couple of Years Can Make

After almost a two year hiatus from taking photos on the street I feel invigorated being out there again. I'm trying my best to avoid things that aggravate the hell out of me about the new city. Mostly the iZombies, chain stores, and obvious suburban Millennial transplants. Ok, I still have an urge to knock down those annoying clipboard (now iPad) people asking to help or save something by trying to relate to you somehow. I'll always prefer the night for street photography because most of those annoyances would be closed or home because of being afraid of the dark (why cities are installing overly bright LED street lights). The one thing I've noticed so far is the lack of other street photographers. A couple of years ago you couldn't walk more than a couple of blocks without bumping into one, even worse in New York City. So at this point the gluten of wannabe street photographers have seemed to vanish and maybe with a little time it's credibility will return. 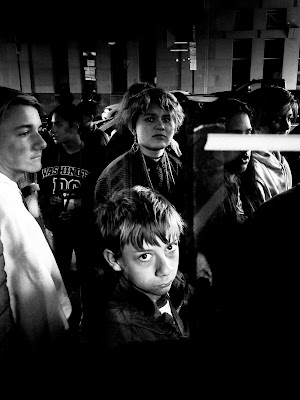