There are often too many conversations about ethics in street and documentary photography. In today's ultra PC world full of people just looking for ways to be offended the photographic image is usually the first example of an item that's attacked. Without understanding the reality of what was actually happening these over-sensitive people will quickly claim that you're "exploiting", "cruel", "a creep", blah, blah, blah. Every photographer has a different gauge in which they measure ethics. For most it's if someone is or has been physically harmed and everything else is up to interpretation. Those who easily get up in arms fail to realise that editing real life is disingenuous and the stuff that dystopian movies are made of. Several people were screaming that I took advantage of the woman in the photo below by capturing her with her dress up ( edited for the internet). What they failed to realise is that already several weeks in on my "Welcome to Market East" project that I previously took several photos of her and one night after doing a few laps of the area she said " you want a good photo, count to three". When she got to three I pressed the shutter and the flash went off. Tell to you truth I wasn't prepared for what she did and I wasn't even sure I got the shot until I looked at the camera's LCD screen. There were several other people standing around and we all laughed, including her who followed up with "I just made your night dear". I don't think I'll ever again have the type of interaction I had while working on that project. There was something very real about those people in a world becoming increasing fake. 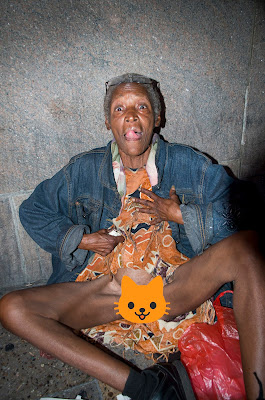