How A Great City Lost Its Soul

"How A Great City Lost Its Soul" is the title of a book by Jeremiah Moss and one I highly recommend to those who are wondering what the hell has happened to New York City. I've read the book twice and often think about the unnatural change happening there and in other cities. Yesterday was no different as I took the train up to see fellow photographer Matt Weber give a slideshow presentation of his New York street photography at B&H Photo. Matt's photos capture exactly what I remember about the 80s and 90s New York. While change has always happened it was never at this hyper pace and in just about every area of the city at the same time. There is also a huge difference between this and every other period of gentrification and growth, it's money. You would be hard pressed to find development going on for the true middle class and lower class. It's out of control and I don't think history will be kind when it looks back at what has happened. I'm betting photography won't either. After leaving Matt's presentation I did what I normally do before getting on the train home. I stop at the nearby Skylight Diner for coffee and something to eat. With the Cheyenne Diner at 9th and 33rd closing in 2008 the sole remaining 24 hour place around for affordable food was the Skylight Diner. Yes there's the Tick Tock around the corner on 8th ave but to call it a tourist trap would be a great understatement. Over the last few years I've noticed the crowds dwindling as what seemed to be a mostly older Jewish clientele stopped coming. Most likely they've been priced out of the area and those that do remain will feel the wrath of the new mega Hudson Yards development a block away. Hordes of mostly young white professionals scuttle like roaches along the sidewalk on the phones. Gone is the true diversity, the culture, the unexpected. Jeremiah was right, the city has lost its soul. 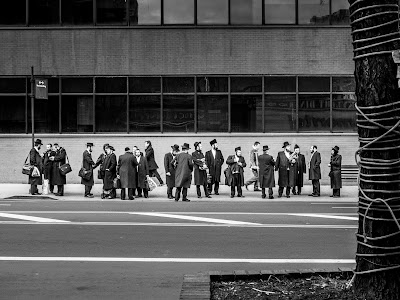