In 2014-2015 I began documenting an area of center city called Market East (now East Market). It's an area East of city hall to roughly 6th street with its main focus on the urban mall "The Gallery" and the "Market East Station" now named Jefferson Station. There was talk about renovating the area which is just another way to say gentrification with a side of trendy. As I prefer to photograph at night I set out with my camera but this time my method changed. Unlike my street photography where I never stopped moving and try to blend in, I decided to try something different. Using a larger camera with a flash and actually stopping to talk to everyone that I wanted to photograph. Unless they were passed out I asked for permission before taking any of the portraits in this body of work. I got to know a lot of the homeless, junkies, and hustlers that I call the "residents". I gained their trust very quickly and there wasn't a night I didn't hear "Hey Michael" coming from the shadows, doorways, or bus stops. Today there have already been two towers built with another 3 on the way, more hotels, and the old Gallery Mall will reopen after a massive rehab as the heavily branded "Fashion District". The area is being thoroughly sterilized and commercialized with 4 large LED billboards (more on the way) and hype advertisements. When this began a lot of the "residents" said this was the "de-blackification" of Market East and frankly it's hard not to agree with them. Much like everything else today the area is marketed and branded to white Millennials and tourists. In the end my only regret was that I didn't begin this project earlier. 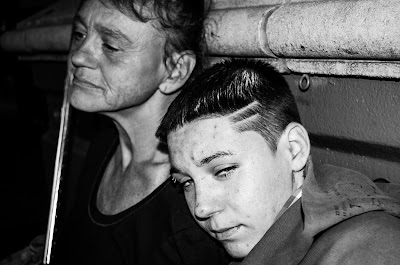