I've always wanted to to a project over the period of 24 hours. I decade ago I approached Nikon about being a sponsor for this but they responded by saying they no longer support individual photographers. Ok not that big of a deal since I could get a full frame dslr and a fast lens from a couple other manufactures. Nope, not one of them were interested in supporting photographers unless they were in fashion or wildlife/landscape. I put the sponsorship on hold and contacted the New York Parks Department about photographing in Bryant Park for 24 hours. After a week I received a response that the park closes at midnight and that if I was going to be photographing in the park for long hours that I was going to need a special permit and insurance. That pretty much put the kibosh on this idea. I'm use to rejection and in 2001 after 911 I was turned down for every project and place that I wanted to photograph. Well it's been a decade and I'm thinking about doing it again, much like how I revived my typologies after 11 years. The question now is what or where do I want to do this. Off the top of my head I thought Times Square. The problem is that I hate today's Times Square because when you've experienced in the 70s and 80s.... well there aren't enough four letter words to describe the tourist trap it's become. Besides there too many photographers currently working there. I then came up with a 24 hour supermarket. They are becoming a thing of the past and now mostly in the suburbs but I can't imaging the hoops I would have to jump through. Permission from the market, most likely a notice posted outside that you could be photographed, would I have to ask permission to each individual and obtain a signed release. Most like this would be a no-go. A 24 hour gas station might be interesting if people still pumped their own gas. People in the backseat of a taxi ? It's already been done by David Bradford. This country is becoming less of a 24 hour world so this might be more difficult now a decade later. 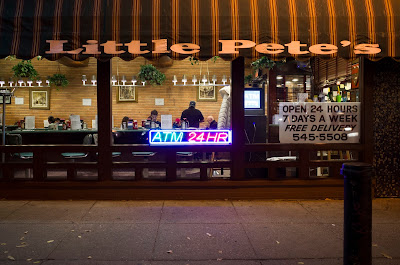