Back To Regular Size Prints

Over the last decade there have been a lot of bad trends in photography but one of the most annoying has to be very large prints. I'm referring to prints larger than 20"x30" and continue out to where they're measured in feet. These are things that make interior decorators happy but can frustrate the hell out of a photographer, especially those that do their own printing.
Until recently, if you wanted a very large print you had to use the digital-c process which has proven to be anything but archival but then Epson, HP, and Canon started to manufacture home printers that could make 60"x 90" prints with a press of the button.
For several years, I was bombarded by people asking for these large prints thinking that they cost as much as a store bought poster. Mostly they wanted something that looked good over their sofa. They were quickly brought back down to Earth after explaining what a print would cost to make. I don't have an idea of per print ink cost but a roll of paper is $500 and the printer itself is now approaching $9000. Then there is the print storage which would require very large flat files and are extremely expensive. Also. one has to remember that at any given point in this process, the purchaser can decline the print.
Once received they have to consider the massive cost of mounting and framing, and if it needed to be shipped there's another few hundred dollars at least. Not a single person who contacted me were aware of the costs associated and most didn't give any thought to the framing costs. This was turning into a huge headache!
Over the last two years, I've noticed a reverse in that trend. People want normal size prints on 8.5" x 11" to 17" x 22" paper. I'm not sure if the cost wore them down or the fact that living spaces are becoming smaller and there simply isn't room for such large prints, but I'm glad it's leveling.
Partial blame for that mess belongs to the "art world" treating photography like painting, where they claim bigger is better when the fact is that most of the greatest photography prints in history could fit in a folded newspaper. 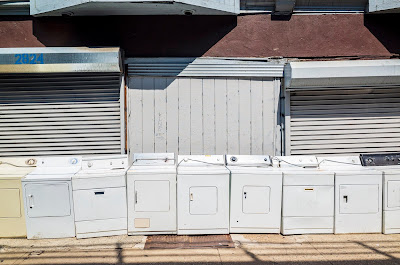