A phenomenon that seems to gaining momentum is the importance some place on the year a photo was taken. Most likely this could be lumped together with nostalgia but it could be more simply a case of older is better or worth more. As I've stated before when speaking about nostalgia, a good photo is a good photo no matter what year it was taken. The problem is I've seen too many print sales come apart for the insipid reasons when and where a photo was taken. Too me it sounds like the most important reason to purchase a print falls to third or fourth place behind those two with another reason being film versus digital, which I can't believe still happens today. Speaking with other photographers I know I'm far from the only one who's noticed this strange occurance. one such photographer said if he renamed his Detroit alley photos as New York City he would sell a lot more of them. I don't doubt his claim for a minute because I myself have lost sales after potential collectors learned that the photos were taken in Philadelphia and not New York City. A couple of us discussed the idea of un-titling, un-dating, and the un-location of future photos. To tell you the truth I like the idea a lot and if someone asks where the photo was taken the response could be "Earth". Even Picasso wouldn't title his paintings which left galleries and curators to come up with titles of their own. He felt that the art should stand on its own without tile or explanation. Today everything needs to be over-explained and over-exploited before people who mostly live on the internet can understand what it is they're looking at. Artist statements, which I loathe, have become bloated to the point that their importance outweighs the art itself. The idea that words and numbers are needed to explain something visual is just downright ridiculous. 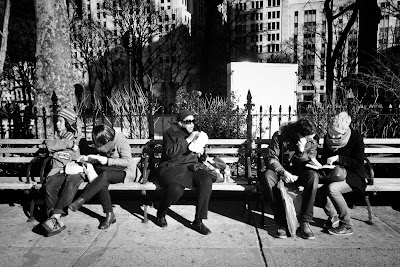