Snapshot Is Not A Dirty Word

When most people hear or use the word "snapshot" they relate it to the amature. The word itselfs projects a visual impression of a photograph taken quickly, haphazardly without discipline or a meaning behind it. Sounds kind of familiar doesn't it? That's right, the same definition could be given to street photography but "snapshot" just doesn't sound as cool or pretentious. The Japanese have no issues saying they take snapshots, and I'm talking about photographers like Daido Moriyama among others. In the Western world calling someone's photos a snapshot is considered and used most frequently as an insult, as something amature, less important, something shitty. With the massive ego of most photographers who occupy the street photography genre it's as insulting as one could get towards another photographer. For the life of me I have no idea who the hell would want to be labeled a "street photographer" today. All the good intentions of the descriptive term are long gone. At first it turned into an elitist activity where the snobby film people would look down on the low life digital camera user, use a non-prime lens was blasphemy, or you had to subscribe to some rhetorical nonsense as the "Decisive Moment". These cliquish and self proclaimed purists had minds as narrow as their perspective and in any visual art this type of thinking is very destructive. Things were about to change but not for the better.
About ten years after the turn of the 21st century when just about everyone owned a camera or a phone that had a camera the world of "street photography" changed again. Facebook, Instagram and Twitter were rocketing up in popularity and people wanted to be "Internet Famous", today it's called "Influencer". Something worse that the elitists happened, street photography became trendy, I mean TRENDY! Walk around any major thoroughfare in Manhattan and you would have to fight your way through hordes of new street photographers who were mostly in their 20s, all working the same corners trying to live out their Garry Winogrand fantasy. They changed gear every couple of months, usually to whatever their hero of the moment was using. They used the term "street photographer" as a badge of honor, a brand, a marketing term, a way to make that type of photography seem more involved that it really is. The trend began to wear thin when the began to figure out that they couldn't survive as a "street photographer". These fauxtographers weren't willing to make the very real sacrifices that artists have to make. The fantasy began to crumble when real life crept in. They were blinded by an overly P.C. ethics while trying to capture their so called version of real life and when in doubt make sure there's a big poster behind the scene to make it comical. Individual aesthetics didn't exist and it didn't need to because their own branded story was more important than what they were capturing. When the panic of failure appeared they began to take photos that they though the masses would like instead of taking photos for themselves. They became offended when they didn't receive massive social media likes and followers, many tried to buy them. In the end their vision was narrow and a lie.
The damage done by all this has rippled through the art world with galleries and museums reluctant to exhibit anything new. They are as confused as the rest of us who are looking at this with eyes wide open. Collectors have either stopped or greatly reduced their activity waiting for this quagmire to end. Non self-publishing of books has sloooowed with some resorting to only those with huge social media numbers with hopes their mostly fake followers will buy a copy. The genre has been decimated by a generation that sees no reason to own a print or book if they can look at it for free on a 5" phone screen. I seriously question the great importance of photography being restored in this century and all of this has me to the point where I want to strip the words "street photography" from everything related to me. For now on I have no problem being called, or considered a "snapshot photographer". My vision and photography has never been so narrow to have rules on what is or isn't street photography. The latest gear doesn't interest me in the least. I give as much attention to a garbage can as I do those walking down the street. To disregard anything on the street paints a very disingenuous picture of life today which is the very purpose it. Hello, my name is Michael Penn and I take snapshots. 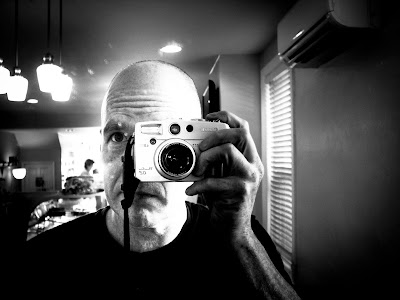