From my childhood to my mid twenties I would get excited when getting back a roll of film back from the lab. These everyday photos were always taken with Minolta point & shoot cameras, mostly because of the brand loyalty my father instilled in me when I was younger. He taught me photography on a Minolta SRT101 slr camera and if were alive today I wonder what he would think about Minolta's demise. I remember finishing a roll with and jumping on my bicycle to get it developed at the local Fotomat. For those who don't know what these tiny yellow roofed hut size buildings are here's a link Fotomat . At one time there were over 4000 in America offering one day developing. With in a couple of days I would ride back to pick up my envelope of 4x6 prints and a fresh roll of film. Opening up that envelop was an adventure because after taking the photos you had no control over cropping, manipulation, and there was no such thing as Photoshop. Afterwards the joy came when you showed the photos to friends and family even though a few of them might be embarrassing. This was a great way to enjoy and share photography without the several week wait and cost of getting Kodachrome developed. You also didn't have to set up a projector and screen for family "slide night". For those under the age of 40 "slide night" was an American family activity of sitting in a dark room together to view slide photos. Even in the late 90s I would take my film to my local corner camera store and lab. Jack's Camera in Old City, Philadelphia was another yellow building that would develop your film but in under an hour. They had their color machine set up in the window so people passing by could watch photos being developed. It was a very sad day when digital photography finally put the place out of business. Today there just isn't the same level of excitement  when rushing home to plug the camera into a computer. The social experience of this type of photography no longer exists. You would have to travel to and from the lab were you would most likely know the staff or bump into friends. Conversations being struck up was commonplace and friends were made. Then after picking up the photos you had to physically show others the prints, not like today where you post them on social media and wait for mostly strangers to "like" them. Just how depressing is that ? 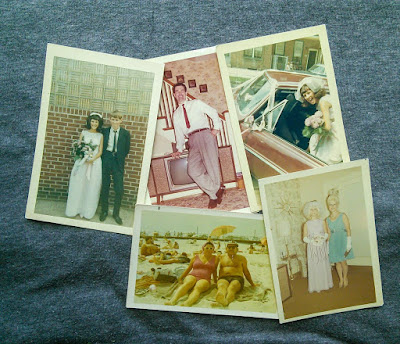